My culinary adventures in Tokyo fall squarely into two categories: food I ate with my cousin (who speaks Japanese and told me what to order) and food I ordered for myself. Food I ate with my cousin was uniformly delicious, and while most of the food I ordered for myself in Japan was good (except in Kyoto, where stuff got weird), I also ended up making some big faux pas. There was the time I thought I was ordering tea, and actually the teapot was full of the water they had been cooking pasta in. There was time I thought I was pouring water from a pitcher into a cup, but actually I was pouring it into the container that they put your check in when they bring it to you. (That mistake I didn’t even realize until 20 minutes after I left the restaurant, where I put together the one waiter’s horror as he snatched the cup away with the other waiter’s surprise when there was nowhere to put the check.) And then there were the times when the food still had its eyes, but I draw the line at eyes. I just didn’t eat that stuff.

Overall, my food consumption in Tokyo was either noodles and onigiri, which were nice and cheap, or sushi, which was expensive but not ridiculous.

Below is conveyor belt sushi! The way it works is that each color of plate is associated with a price. The chefs just stand on the inside chopping away and putting plates on the belt, and then as it goes by you pull off whatever looks good. At the end you stack them all up and they count your plates, and then give you the total. It’s a pretty good deal if you go with enough people; I think my share was only $20 or $25, which is amazing given how many different kinds of sushi I tried! (I did not eat the ones with eyes, although my cousin’s fiancé, who is Japanese, did.) 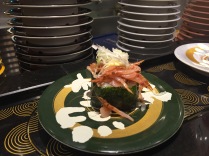 I did not eat the things with eyes. 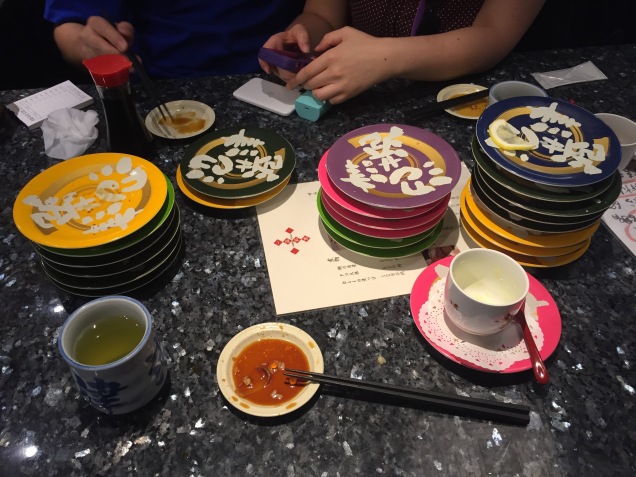 Noodles of Tokyo. Clockwise, cold udon with a poached egg and tempura sticks of shrimp and vegetables; mushroom soba, ordered from a restaurant where no one spoke English by pointing at a picture of what I wanted to eat (the soup was delicious but I ended up with a teapot of pasta water); and dumplings. No idea what was in them. In theory, I am a big fan of the picture menu in countries where the alphabet is completely unrecognizable, but of course those menus limit you to tourist restaurants if you want to understand ahead of time on what you’re going to eat. I don’t particularly like eating in tourist restaurants… which is why I ended up eating a lot of very weird, oddly gloopy things in Kyoto.

Udon with tempura sticks. One was shrimp, the rest vegetables. It was cold, which was super refreshing on a hot day!

Dumplings! My favorite food. I think this restaurant may actually have been Chinese, but it was very hard to tell.

Mushroom soba. This is the meal where I poured myself a nice cup of pasta water.

Plastic food. This was super common, and I have at least ten or twenty photos of amusingly shiny plastic food, ranging from crepes to pizza to udon. I’m guessing the point is to take the picture-menu-for-tourists thing one step farther, but maybe not.